Snowflake publishes results on Wednesday, giving investors a fresh look after after the company fell 67% since November in the tech bear market.

The cloud-based data warehousing software company is exactly the kind of stock that the market has come to shun – fast-growing, but with a lofty valuation and minimal profits.

Snowflake SNOW –6.09% (ticker: SNOW) went public in September 2020 at $120 a share, doubled on the first day of trading, and last fall briefly topped $400. On Tuesday, just ahead of the company’s April quarter earnings report, the stock has sagged another 6% amid a broad tech sell-off, to $130.63, nearly completing a round-trip back to the IPO price.

The price been cut in half since the company last reported earnings in early March. That report was not well received, due in part to softer-than-expected guidance. It was also partly a reflection of a policy change affecting the company’s unusual consumption-based revenue model, in which customers pay for the compute time they use, no more, no less.

On Tuesday, Rosenblatt Securities analyst Blair Abernethy made the bold call to upgrade Snowflake shares ahead of earnings, boosting his rating to Buy from Neutral, while trimming his target price to $255 from $325. 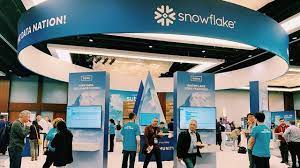