Deal Announcement: Rosenblatt Securities serves as an advisor to Euronext on its agreement to acquire FastMatch

Rosenblatt Securities is pleased to announce its role as the financial advisor to Euronext N.V. (ENXTPA:ENX) on its agreement to acquire FastMatch, Inc., the fastest growing ECN in the spot foreign exchange market. Euronext is acquiring approximately 90% of FastMatch for $153 million initial cash consideration in addition to a contingent earnout payment of $10 million.Click here for the press release

The transaction demonstrates Rosenblatt’s deep domain expertise in capital markets trading and financial technologies, with the ability to deliver value to the most sophisticated and demanding market participants and investors, both traditional and non-traditional. Some of our other recent notable engagements include serving as an advisor to an on-line automated advice platform, or “robo advisor,” Blooom, on its Series B financing, alternative lending platform SnapCap on its debt financing, Thesys Technologies on its winning bid of the Consolidated Audit Trail Plan, Pico Trading on its acquisition of AlgoSpan, Voltaire Capital on its acquisition of proprietary trading firm Caherciveen Partners, and GTS on its acquisition of Barclays PLC’s NYSE Designated Market Maker trading business. On the public company front, we have served as a co-manager for the IPOs of CBOE Holdings, Bats Global Markets and Virtu Financial after having been an industry advisor to Silver Lake in its earlier investment in Virtu. 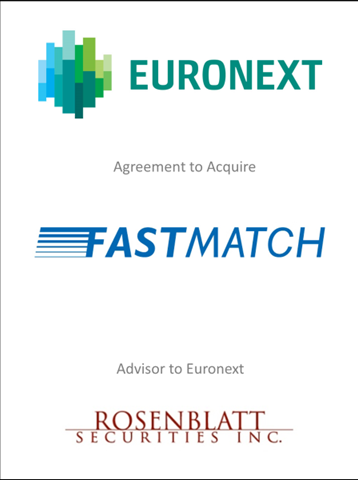