The Ambarella Analysts: Rosenblatt Securities analyst Kevin Cassidy has a Buy rating on Ambarella shares and increased the price target from $65 to $82. The analyst said the stock remains his top long idea.

Needham analyst Quinn Bolton maintained a Buy rating and hiked the price target from $63 to $80.

Morgan Stanley analyst Joseph Moore maintained at Overweight and lifted the price target from $79 to $83.

Rosenblatt Sees Ambarella Turnaround: Ambarella's long-term strategy for investing in computer vision-based SoCs to transform the company is paying off, Cassidy said in a note.

The combination of new automotive designs ramping into production and the increase in overall automotive demand helped revenue outperform the high-end of the company's guidance and the consensus, the analyst said.

The company announced more than 14 new design wins in the quarter, he said.

The guidance for $600 million in revenue in through fiscal year 2027 from automotive designs is only a starting point, Cassidy said.

"In summary, Ambarella has turned the corner, in our view. We expect that the company's CV products can revolutionize the Security and Automotive camera/ADAS market."

Rosenblatt said it continues recommending shares as the company's pipeline of design wins continue to ramp into production.

With Security expected to grow in low-double digits sequentially and Automotive likely increasing by more than 20% both year-over-year and sequentially, the company's fourth-quarter revenue guidance is a solid beat, the analyst said.

The non-GAAP gross margin guidance is below Needham's estimate due to a change in product mix that will likely increase Hikvision and Dahua revenues and decrease consumer revenues, he said.

"We believe as the revenue and design activity grows for Ambarella's CV processors, AMBA's share price will move higher."

Probability Of Beat-And-Raise Quarters Increasing, Morgan Stanley Says: The better-than-expected results from Ambarella are a byproduct of continued embryonic growth of CV, strength in the consumer platform, including consumer surveillance, and a rebound in automotive production, Moore said in a note.

"We continue to think that this company is turning the corner, and that the perception will change over the next few quarters as computer vision becomes the most important factor for growth - at the same time that the legacy video processing is likely bottoming out," the analyst said.

The probability of continued beat-and-raise quarters is increasing, Moore said. Although the early nature of computer vision limits earnings, Ambarella is emerging as a growth stock in a market that has been paying a premium for semiconductor growth, he said.

Valuation Keeps KeyBanc On The Sidelines: Ambarella is seeing troughing demand in its IP security business as Hikvision and Dahua have begun working through its excess inventory and started ordering again, and also from the ramp of CV, Vinh said in a note.

Based on the guidance, KeyBanc raised its estimates but remains on the sidelines due to valuation.

Summit Sees Meaningful Tailwinds for Ambarella: The pandemic and U.S.-China trade restriction headwinds are now mostly behind the company, Chan said in a note.

The U.S. export control restrictions against Huawei/HiSilicon are now benefiting Ambarella, as more Chinese customers are embracing its SoC solutions, the analyst said.

"We remain excited about the industry adoption of computer vision (CV) based video cameras and believe AMBA stands to benefit most from this industry transition."

The analyst expects meaningful tailwinds for the company heading into 2021. 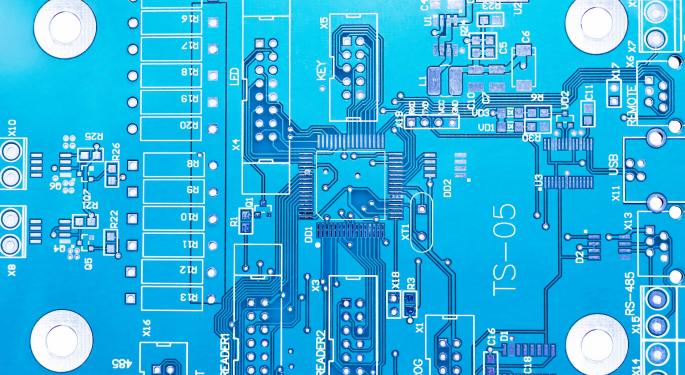