The Qualcomm Analysts: Rosenblatt Securities analyst Kevin Cassidy maintained a Buy rating on Qualcomm shares and upped the price target from $175 to $180.

Morgan Stanley analyst Joseph Moore maintained an Overweight rating and lowered the price target from $171 to $167.

Earnings exceeded expectations due to a higher gross margin, which benefited from certain customers making early and unexpected deliveries of products, the analyst said.

The guidance for a seasonal decline in March quarter revenue and a sharp sequential decline in margin at the Qualcomm Technology Licensing segment should disappoint investors, he said.

"We see this as temporary and not a structural change to the company's profitability."

The guidance for a 4% sequential decline in the Qualcomm CDMA Technologies segment revenue is well above the 15% seasonal decline, Cassidy said.

The upside will stem from increasing content in 5G smartphones and strong demand for adjacent automotive and IoT products, the analyst said.

Rosenblatt said it sees no structural change to Qualcomm's prospects in front of the 5G upgrade cycle.

This, along with lower royalty revenues for the March and June quarters, makes the quarter a complicated one, the analyst said.

Operating expenses were slightly higher, and mix-related gross margin pressure is evident in chipsets, he said.

All of these factors will be negative for the June quarter, Moore said.

Royalties will reflect weaker expectations from Huawei in the March quarter and beyond, the analyst said.

Yet the Huawei shortfall has been a key driver of the chipset outperformance, as the market share that previously accrued to Huawei shifts to Qualcomm customers, he said.

Raymond James Sticks To Qualcomm Thesis: Qualcomm delivered a mixed report in which supply constraints failed to deliver the upside the Street had hoped for, Raymond James analyst Caso said.

Yet the March quarter was solidly ahead and better than seasonal, with auto/IoT continuing to beat expectations, the analyst said. Commentary on the June quarter, he said, implied that chipset revenue would decline by about 14% sequentially due to Apple Inc seasonality.

The China revenue opportunity — driven by replacing Huawei/HiSilicon — is now pushed to the second half of fiscal 2021 due to supply constraints, Caso said.

"Net, the report probably isn't good enough for today given the stock's recent run, but it also doesn't change our thesis, and our FY22 numbers remain largely unchanged."

Qualcomm's 2021 Looks Robust, KeyBanc Says: The company expects the supply constraints to impact first-half results and normalize in the second half, analyst Vinh said in a note.

According to the company, the key drivers for 2021 are an anticipated high-single-digit annual increase in total global handset shipment, a doubling of 5G smartphones in 2021 to 500 million and anticipated share gains related to other OEMs gaining share at the expense of Huawei, the analyst said. 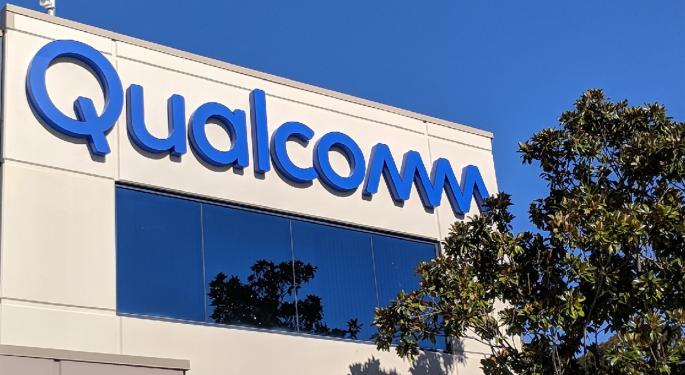