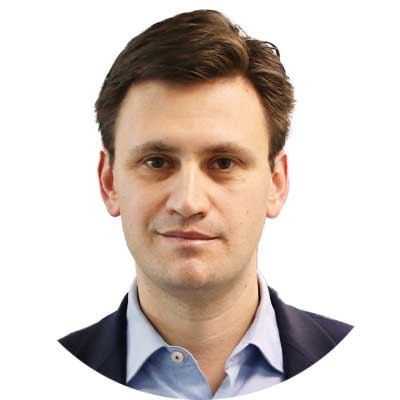 Andrei Cherny has spent nearly twenty years working to make the financial system more open and fair. He combines a background as an advisor to some of America's top companies, the co-founder and president of a media start-up, a financial fraud prosecutor, a historian, a White House aide, a Navy reserve officer, and a nationally-recognized economic policy expert.

Andrei has provided strategic counsel to companies such as Intel, Qualcomm, and Bank of America. He launched and grew Democracy Journal to one of the most widely read idea journals in America. There, he helped start the successful fight for the new Consumer Financial Protection Bureau. A former Clinton White House aide, he was the youngest White House speechwriter in American history. His 2000 book, The Next Deal, showed how business and government would be transformed by people's demands for more and better choices. He is also the author of the The Candy Bombers.

He graduated from Harvard University and from the University of California Berkeley law school.

Aspiration helps their customers spend, save, and invest with a conscience so people  can make money while making the world a better place. The platform allows customers to get paid monitor the impact of their spending on the planet, earn 10% cashback at socially responsible businesses, and opt to plant a tree with every purchase made. The company also promises to not use any of its customer’s deposits to finance activities counter to fighting climate change, such as building oil pipelines, coal mining, or deforestation. Users with their direct deposits linked to Aspiration, can get paid up to 2 days earlier. Aspiration Plus allows for APY’s of up to 83 times higher than traditional savings accounts. The company is also backed by Robert Downey Jr. and Leonardo DiCaprio. Aspiration was founded in 2013 and currently has roughly 300 employees with headquarters in Marina Del Rey, CA.