Over the course of 75 years, Donald Trump amassed a pile of assets—skyscrapers, hotels, golf courses and so on—worth an estimated $2.5 billion, after subtracting debt. Then, in practically no time at all, he conjured up a new business, the Trump Media and Technology Group, which hasn’t done much yet but plans to launch a social media company and various other ventures. Investors are already suggesting it’s worth about $10 billion.

The people valuing Trump’s enterprise at this price are everyday stock pickers. They still can’t purchase shares in the Trump Media and Technology Group, but they can buy stock in a pile of cash—also known as a special purpose acquisition company, or SPAC—that plans to merge with Trump’s business. News of the merger sent shares in the SPAC soaring from about $10 to $60 apiece over the last four weeks.

If the stock remains at $60, the SPAC shareholders will be left with an estimated $2.2 billion interest in the combined company after the merger. Investors in 15 million warrants tied to the SPAC will be sitting on another $300 million. The current owners of Trump’s company—it’s not yet clear what the former president’s personal interest is in the business—will receive an estimated 86 million shares as part of the deal, worth $5.1 billion. And, assuming shares consistently stay above $30 over the course of about a month and a half after the merger, the owners of Trump’s group will receive an additional 40 million shares, worth $2.4 billion at today’s prices. In total, that all adds up to $10 billion.

If Trump attracts a higher percentage of his former followers, the numbers would, of course, get bigger. If, say, 50% turn into daily users, Trump’s business could defend an $8.4 billion valuation. An even larger figure doesn’t sound crazy to Mark Zgutowicz, a stock analyst that covers Twitter and the Fox Corp. for Rosenblatt Securities. “You could easily get to a $9 billion to $10 billion valuation,” he says 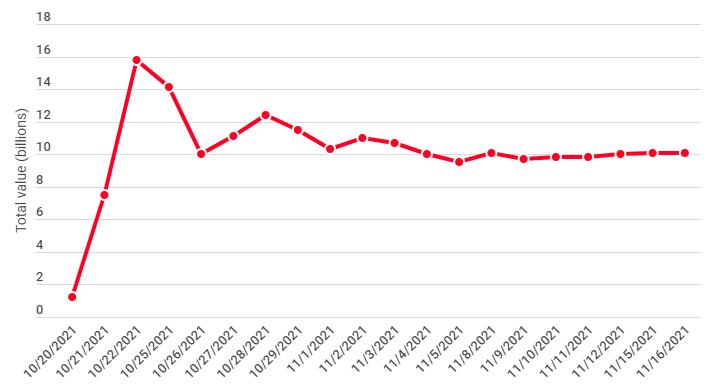