Making Sense of the Innovation in Investment Banking

How SPACs, Direct Listings, and Dutch Auctions Are Part of a Longer Arc of Change

Special purpose acquisition companies (SPACs) are becoming popular in 2020 as funding vehicles to take companies public instead of the traditional IPO. But it’s important to consider SPACs in the larger context of change that has been happening in investment banking for the last 20 years since Bill Hambrecht pioneered the idea of the “Open IPO”. This Rosenblatt viewpoint describes innovations in investment banking across four areas - fundraising, IPOs, M&A, and private securities trading – and their significance. None of these developments may seem profound by themselves, but together they reflect the changing nature of investment banking. Technological innovation and a new crop of FinTechs are enabling new business models and novel approaches that will transform this capital markets function over time.
‍

In going public, private companies have long used investment bankers to underwrite their offering and following a traditional IPO process and model. Bankers carefully build a book of institutional orders, determine a listing price for the new issue, and stabilize the offering once it lists. Bankers price the new issue conservatively, so there is a ‘pop’ or gain in the IPO price on the first day of trading, which has been 16-19% over 2018-2020 according to Deal Logic. This is a reward for institutional investors who take a risk on the new issue before it goes public, but it also reflects money left on the table by the issuer.

An alternative to the traditional banker-driven IPO model is a true market-driven process of pricing and placing a new issue, with limited involvement of investment bankers.

Direct Listing and Dutch Auctions are two market-driven models where the price of a new issue is determined by the free interaction of demand and supply on opening day instead of bankers carefully constructing an initial order book from institutional investors. Prominent deals executed via a Direct Listing (DL) include Spotify and Slack, with Palantir planning to go public in Q3 2020 the same way. In certain cases, firms may decide to go public via a DL only to provide liquidity to current shareholders and to openly allow all investors to buy/sell its stock, but with no new shares being issued. As no new capital is raised by the firm, this special form of a DL is actually just a liquidity event, not a funding event. An Open IPO is a particular type of Dutch Auction popularized by Bill Hambrecht (Founder, CEO of WR Hambrecht & Co) who brought 21 companies public using this model, including Google, Interactive Brokers, and Morningstar. The average gain in the IPO price on issuing day for the Open IPOs conducted by WR Hambrecht & Co was 3.1%, compared to 16-19% for traditional IPOs as mentioned above. This is a major argument in favor of Dutch auctions over the traditional banker-driven process as it gives most of the capital raised to the issuing firm instead of institutional shareholders.

A special purpose acquisition company (SPAC), aka blank check company, is an alternate financial structure to raise capital and go public. It involves raising capital to create a shell company which then finds under-appreciated businesses to acquire and take public via the SPAC. There are several advantages of this model, the biggest being the ability to avoid the expensive and lengthy traditional IPO process. While the SPAC concept has been around for a decade, it has shot to popularity in 2020 with prominent PE firms (e.g., Bill Ackman’s Pershing Square Capital) using it to bring private companies to the public market. By 1H 2020, $13.5 billion has been raised by SPACs, compared to $14.5 billion raised in all of 2019. Prominent firms brought public this year using this model are Draft Kings, Nikola and Virgin Galactic. FinTech investors are also gearing up to use the SPAC structure, with Ribbit Capital planning to raise $600million that it intends to use to take portfolio companies public. Several other VCs are considering SPACs to take their portfolio companies public to avoid the expense of a traditional IPO and as a more effective way to realize liquidity in portfolio holdings. But one concern is the conflict of interest that can surface between investors in their private portfolio and SPAC investors.

M&A advisory is the most lucrative banking activity and until recently, has remained very manual and high touch. While market data vendors (Bloomberg, Refinitiv) and specialist providers (Factiva, Dealbook) have long offered data to support M&A deals, the core process of lead generation, due diligence, and deal negotiation have remained human-intensive. But just like other areas of investment banking, technology and innovation are encroaching into this space, albeit at a slower pace.

One big difference in M&A is that instead of mainly FinTechs driving the change, major financial institutions like Goldman Sachs and JPMorgan are innovating and providing software that automates basic M&A activities. Goldman Sachs just developed an M&A platform called Gemini used by its bankers and offered to clients so they can identify sale and spin-off opportunities, or takeover targets. The service helps a firm benchmark the performance of individual businesses with its peers, so a big corporate like P&G can decide strategic options for each business, whether to help it grow through an acquisition or to divest it. Similar offerings have been rolled out by JPMorgan and Credit Suisse though they are not branded and less advanced than Gemini. In an effort to streamline the funding process, JPM and some banks are also testing digital ledger technology for payments settlement and other M&A functions.

Then there are innovative FinTechs that are tackling M&A matchmaking using technology. Axial (referred to as the tinder for M&A) is a platform for middle-market companies that uses algos to match target companies with potential acquirers. It has processed over 6,000 deals in the $5-$250M range, charging 0.25% for the average deal compared to 3-5% charged by a traditional banker.

While over 90% of M&A deals still involve an investment banking intermediary, the banker’s role is slowly shifting towards higher-value activities like deal structuring and negotiation while lower-level activities are being automated. Meanwhile, several tech companies have eschewed the use of a banker completely: Apple’s acquisition of Beats, Comcast’s takeover of DreamWorks, Facebook’s WhatsApp deal, and Oracle buying Micros Systems.

Innovation in the trading of Private Securities: Enabling liquidity in privates

With more firms staying private and for longer periods of time before going public, the illiquidity of private securities has become a crucial issue for investors in the firm and employees with equity. Another structural problem is that most retail investors and a lot of institutional investors are unable to invest in private securities, so they are deprived of a crucial source of wealth creation and diversification. Both these problems are being addressed by deploying innovative technology and by enterprising FinTechs that are delivering price transparency and liquidity to private securities. SharesPost was the first FinTech to create a marketplace in 2009 for private securities to be listed and traded, but in the last five years there has been a flood of new players including EquityZen, GTS-sponsored ClearList, Nasdaq Private Markets, Forge (merged with SharesPost in May 2020) and Zanbato. Addepar and Carta have also announced plans to launch the trading of private securities later in 2020.

These FinTechs are focused on improving the private market by sequentially addressing three distinct challenges about private securities: transparency, price discovery, and liquidity. Addressing these issues for private securities would make them more appealing to investors.

1) Transparency: make financial data, operating metrics and governance of private companies more available and standardized so that investors can evaluate them better

2) Price discovery: create an environment for market-driven pricing that reduces spreads and increases execution rates, all at an affordable price

3) Liquidity: attract a growing number of issuers and shareholders to list securities on these exchange-like platforms to drive liquidity.

Providers are addressing challenges in the private market with different business models and are at varying levels of maturity and growth. Nasdaq Private Market (formed by its 2015 acquisition of SecondMarket) is the farthest along having executed 350 liquidity programs for 230 companies. The combination of SharesPost and Forge created of the largest global private securities marketplaces, with $6 billion in transaction volume completed for over 1 million shareholders. Zanbato has a very interesting model being a crossing network for institutionally-sized blocks of private securities, and is growing rapidly. EquityZen provides accredited investors access to pre-IPO, late-stage tech companies through its investment funds.

The funding of early-stage private companies has also undergone massive change in the last 10 years driven by new blockchain-based funding mechanisms called tokenized offerings (initial coin offerings – ICOs, and security token offerings - STOs), and a massive growth of crowdfunding platforms like Kickstarter, Indiegogo, AngelList and GoFundMe, that were boosted by the JOBS Act of 2012. (The JOBS Act is a law to encourage funding of small businesses in the US by easing securities regulations and enabling firms to use crowdfunding to raise equity capital).

ICOs began in 2013/2014 with MasterCoin, Ethereum, and NextCoin, but they gained popularity as a funding mechanism in 2017-2018 with EOS raising $4.2 billion in 2018 for a total of $7.8 billion that year. But by 2019, the ICO craze began dissipating due to the SEC deeming ICOs to be securities, asking issuers to comply with strict securities laws, and heavy enforcement against promoters of these funding mechanisms, such as Telegram. STOs were an improvement over an ICO providing greater investor protection, and is basically a traditional security wrapped in a securities token. STOs were popular in 2019, raising $12 billion of capital, but they have also edged out of favor mainly due to the lack of a secondary market to trade them. But the long-term promise of a tokenized security as a digital mechanism for funding assets, especially esoteric ones like digital rights or alternative assets, remains intact, and we may see ICOs/STOs reincarnate into new forms of funding in the future.

Meanwhile, crowdfunding platforms have grown fast and furiously over 2010-2020 and filled a big void in the market to fund early-stage startups and projects. There are different market segments: reward-based, charitable, donation, and equity crowdfunding which is most relevant to this report. Examples are AngelList, Indiegogo, CircleUp, SeedInvest, and Fundable.  Meanwhile, the most active platforms are in the real estate and property markets. CrowdRise, DiversyFund, and Fundrise are the most popular real estate platforms, while PropertyTechs like Figure, HomeTap, RoofStock, and Unison are building two-sided platforms to open up real estate investing to a larger group of retail and institutional participants.

Of all capital markets functions, investment banking (including private funding, public listings, and M&A) has remained human-intensive and relatively unchanged over time. But the combination of innovative technology (AI/ML, digital ledgers), ambitious FinTechs, new funding mechanisms (tokenized securities), and modern structures to take companies public (Direct Listings, Dutch Auctions) are transforming banking. These changes may commoditize traditional banking functions and put pressure on the high margins that banks have enjoyed from this business. Leading bankers like Goldman Sachs and JPM are trying to stay ahead of this trend, rolling out M&A platforms for in-house and client use, or experimenting with blockchain technology for funding and settlement. Over the next five years, lower level banking functions and activities will get fully automated and offered as a service by innovative FinTechs, forcing traditional investment banks to push up the value chain to remain relevant and maintain this highly lucrative revenue stream. 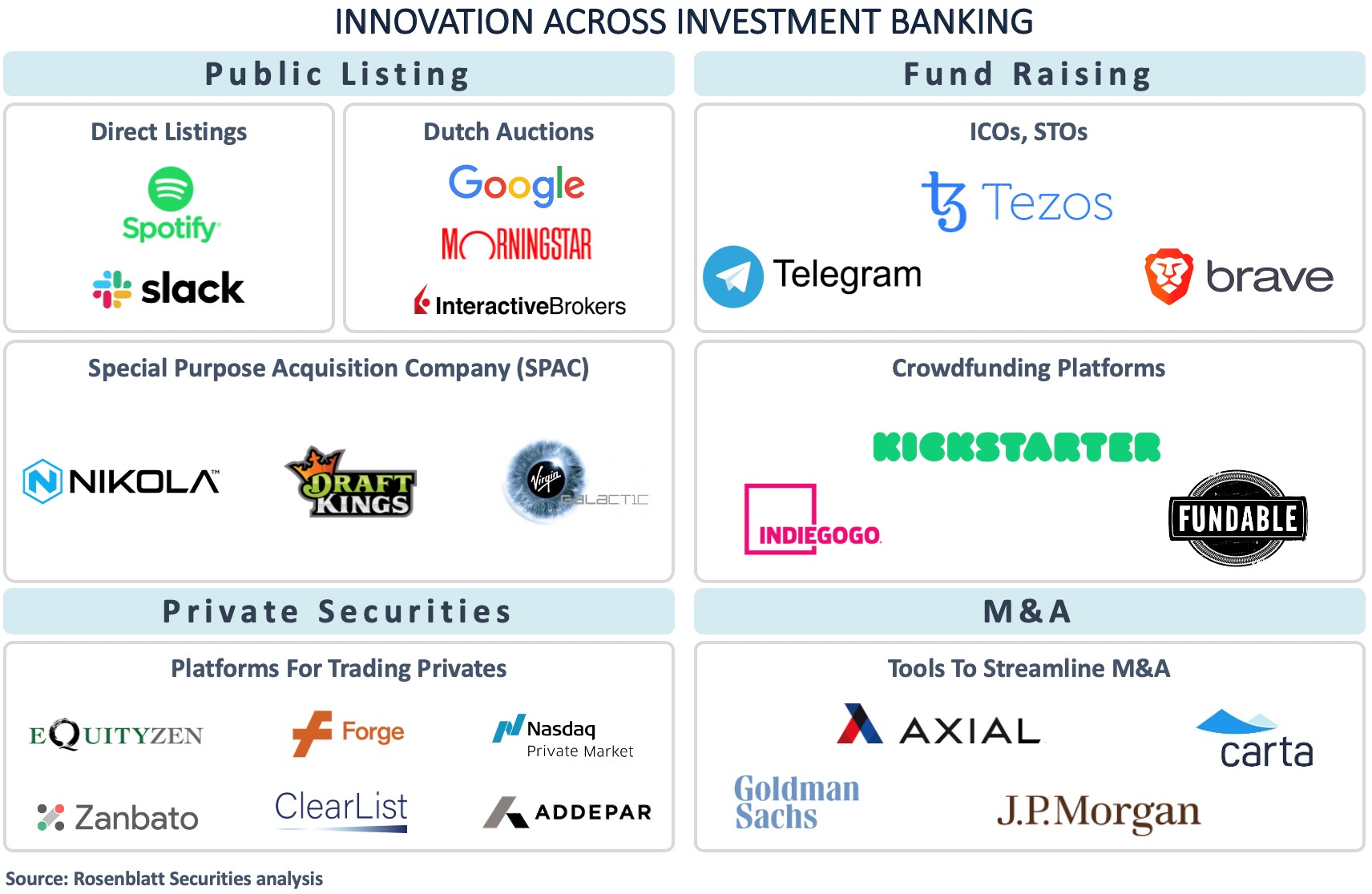